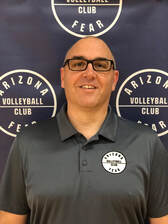 Tony Oldani will be in his second year with Arizona Fear. Coach Oldani has been with the Brophy Prep boys volleyball program since the spring of 1995, serving as the assistant coach for 4 seasons before taking over as head coach prior to the 1999 season. In his time directing the volleyball program, the Broncos have won the State Championship two times, in 2001 and 2006, and finished as Runner-Up in 1999, 2012 and 2015. He also led the team to the Final Four in 2004. In 2001 and 2006, Oldani was named the Arizona Boys’ Volleyball Coach of the Year by the Arizona Republic. Oldani is also currently an assistant coach for the Xavier Gator varsity volleyball team where he has aided in 6 State Championships 1997, 2007, 2008, 2009, 2010 and 2013.Oldani has spent time with a variety of clubs including  Arizona Juniors, Club Red, Arizona Storm, and AZ Sky coaching girls and boys.

​     Coach Oldani played collegiate volleyball at the University of Illinois as a setter and opposite hitter from 1991 to 1994.  In addition to his Bachelor’s Degree from Illinois, Coach Oldani also has a Master’s Degree in Coaching and Athletic Administration from Concordia University in Irvine. He’s been married to his wife Renee since 2000.  They have 3 sons; Riley , Patrick , and Connor.