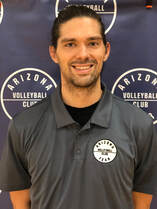 ​Shawn Brannick has been coaching high school, club, and men’s college volleyball since 2009. Shawn graduated from Minooka High School in 2005.  Upon graduation, Shawn played Opposite for Quincy University (MIVA) during his collegiate career.  Brannick moved back to Chicago in 2010 and coached for D1 Volleyball Club from 2010-2014 while teaching and coaching for Lincoln-Way North High school during that same time.  In 2014, Brannick was hired as an assistant to help found a new DIII Men’s program, North Central College in Naperville, IL.
Shawn moved to Phoenix in 2016 with his wife Schea and mastiff-shepherd, Morgan.  He currently teaches at Millennium High School in Goodyear, AZ and started their men’s volleyball program in the 2016-2017 season.