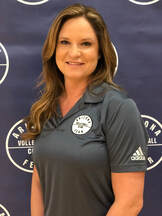 Molly Stark begins her 8th year as the guiding and driving force behind Spiral Volleyball.  In just a short seven seasons Stark, the club's founder, has developed Spiral into one of the top ranked clubs in Arizona and the youngest club to be ranked in the top 50 in the country (as ranked by Triple Crown Sports).  In the 2014-15 season, Stark's first coaching on the boys side, she guided both 18UA Boys and 18UA girls to Silver Medals at the USAV Junior National Championships. She becomes the first coach in Arizona region history to take both a boys' and a girls' team to the national championship match in the same season.
With experience as both a player and coach at all levels of volleyball from high school to the international game, Molly brings a unique understanding of the game and the rigorous requirements necessary to compete at the highest level.
​
Named the Most Valuable Player at Horizon High School and selected by the Arizona Republic as 5A Player of the Year in Arizona, Molly was recognized as one of Volleyball Magazine's "Fab 50" outstanding players in the country as a senior.  Recruited heavily by several top collegiate programs, she accepted a full-ride to the University of Notre Dame.  As a senior she was named one of Notre Dame's top three female athletes following a season that saw the Fighting Irish make it to the "Great 8" of the NCAA Tournament.

Following graduation, Molly gained international experience as an outside hitter and middle blocker playing for teams in France, Belgium, and Switzerland. Her determination and hard work resulted in her Belgian and Swiss teams competing in the European Cup. Taking time from her busy practice and competition schedule, she coached both European men’s and women’s teams. This experience sparked her intense interest in coaching which persists to this day. Returning to the United States, Molly was selected as one of the original members of the United States Professional Volleyball League “Dream Team” coached by volleyball legend Arie Selinger. As the League expanded she was chosen to play as a libero for the St. Louis Quest.

After ten years of international indoor volleyball competition, Molly returned to Arizona and was voted Desert Region Coach of the Year by her peers following her first year of high school coaching at Shadow Mountain High School.   In 2007 her Valley Christian High School team won the 2A Regional Championship.   Passionate about coaching club volleyball, Molly’s Arizona Juniors team won the 16 Open Regional Championships in 2008 and qualified for the Junior Olympics. Appointed Head Coach of the Arizona Region High Performance Youth Team, she trained and developed an aggressive team of players from all over Arizona. Competing against top teams from the United States, Chili, Puerto Rico, and Canada, her team dominated the competition and won the International Youth division of the 2008 High Performance Championships.  In 2009 her Spiral Volleyball 17-1 team finished 12th in the National division at the USA Volleyball Junior Olympics, and her Valley Christian High School team won the 2A State Championship.  In just the past three seasons Stark has two top-10 Girls Jr. National Championship Open finishes, a GJNC Silver Medal and a Boys Jr. National Championship Silver Medal.

In addition, Molly’s teams have attracted the attention of university coaches from across the country. Her extensive work with young players throughout Arizona has given her a special following among those who wish to compete at the highest levels. Her tough, positive motivational style, commitment, and high expectations result in their rapid improvement and prepares them for competition at all levels. Additionally, as a Certified Personal Trainer, Molly rounds out her players’ preparation with a vigorous and comprehensive program of training and conditioning.